The Krios of Sierra Leone historic links to Britain began with Britain’s part in that heinous ‘Slave Trade’– for the ethnic group called ‘Krios’ are descendants of various African American, Caribbean, and African ex-slaves and freemen who the British resettled in Africa in the modern day West African country of Sierra Leone. Here is their story:

In 1772 Lord Chief Justice Mansfield declared slavery illegal in Great Britain, through efforts of abolitionists such as Granville Sharp and Olaudah Equiano. Following the American Revolutionary War, there were thousands of freed slaves in London suffering from acute poverty and unemployment. In 1786, Sharp and other philanthropists formed the ‘Committee for the Relief of the Black Poor’ to provide sustenance to these people. Sharp also conceived the idea of founding a ‘Province of Freedom’ in Africa for their resettlement. He belonged to the ‘Clapham Sect’ that included abolitionists such as William Wilberforce, Zachary Macaulay and Thomas Clarkson (In 1792, this sect subsequently founded in Sierra Leone what would become the first major British Colony in Africa). Sharp’s ‘immigration scheme’ had received vocal support from some influential Blacks in Britain, but some decried what looked like the ‘deportation’ of Blacks to a potentially dangerous land. Historians differ as to whether the motives were purely altruistic or whether the key motive was to remove Black people from London! 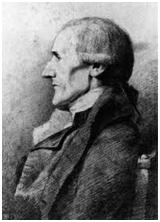 However, on April 9th 1787, 411 Black American, African, Caribbean, and a few Bengalis (collectively called the ‘Black Poor’) set sail for Sierra Leone. Also included were a few dozen White women, likely wives and girlfriends though they are traditionally depicted as London prostitutes! The immigrants arrived in Sierra Leone in May 1787 and established ‘Granville Town’. The colony lasted until December 1789 as disease and hostility between the colonists and indigenous people left only 64 original returnees remaining by early 1791.

Following the demise of the first colony the next group of settlers were known as the ‘Nova Scotians’ or ‘Settlers’, mainly American slaves who had earned their freedom after escaping and fighting for the British during the American Revolution. The British had resettled some in Nova Scotia, Canada where they soon felt the familiar hand of discrimination and the harsh Canadian winter! One called Thomas Peters travelled to London to protest their situation and returned to orchestrate their resettlement to Sierra Leone. On January 15th 1792, fifteen ships carrying approximately 1200 Nova Scotians left for the shores of Africa. 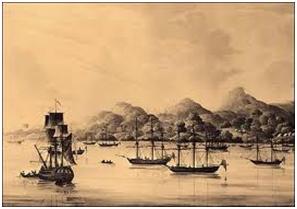 The Nova Scotians were more resilient than their predecessors. Many were skilled artisans or had other trades. They built a new settlement called ‘Freetown’ which was the basis for the new Colony of Sierra Leone that eventually encompassed Granville Town. By the 1820’s they had become the Black bourgeoisie. In December 2011 Krio Descendants Union Freetown erected a statue to honour Thomas Peters. 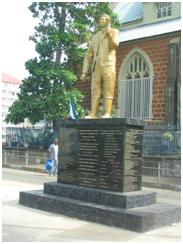 The next group resettled were the ‘Maroons’, ferocious ex-slaves from the Jamaican mountainside. Many were of Ashanti and Fanti origin. They had long fought the British and when the Trelawney Town Maroons lost the Second Maroon War they were deported to Nova Scotia and subsequently 600 were resettled in Freetown in 1800. The Maroons were not the only Caribbean settlers and West Indian soldiers from the 2nd and 4th West India Regiments were also stationed and disbanded in Sierra Leone.

In 1807 the British Parliament passed a bill forbidding the slave trade within the British Empire and from 1808 onwards thousands of people resettled in Freetown were known as the ‘Liberated Africans’ or ‘Recaptives’, for they had been rescued from slave ships before they reached the shores of the Americas. Many were from the modern day countries of Nigeria and Congo, and were of Yoruba, Igbo, and Bakongo stock. Others had come from along the coast of Africa such as Cameroon, and Senegal.

The descendants of these four settler groups (i.e. the Black Poor, the Nova Scotians, the Maroons and Recaptives) make up the unique ethnic group known as the ‘Krios’. Krio heritage is thus an interesting mix of various cultures including British. This is reflected in the language, architecture, dress, lifestyle and traditions.